In early April, my trading account was around $350. Over the last few weeks, I have been practicing The Strat, and I found my way to Jim Bradley. I had a solid start, and I have decided to share my trading here.

Today I made one trade in AAPL, which netted a 3% return. This post will show how trading options can make trading much more frustrating, as well as show why I decided to call it for the day.
First of all, we always have to start with broader time frames to determine our bias. I know that "stratters" in general are fine trading it on the way up and then trading it on the way down, but I find this very difficult to do on 1-min charts. First of all, as exemplified in this post, when you're fighting the narrative of the larger time frames, it's much harder to find consistent moves. Second, 1-min charts require you to be nimble. I find that if I'm not prepared or can't imagine the reversal playing out, it's better to stay away.

The AAPL month and week had upside bias, and the daily chart looked like it could become a beautiful 3-2d(as a hammer)-2u. Here is the setup I found on the 1-min chart: 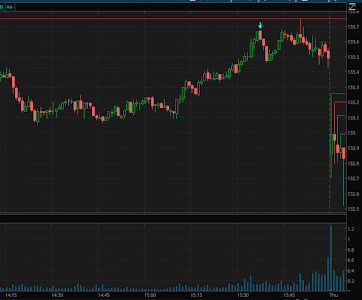 When AAPL opened, it opened in another lovely reversal pattern. It opened 2d, and then had 3 inside bars. I entered my trade plan after the third inside bar, when I thought selling was for sure drying up, and my pivot machine gun was locked and loaded. But then I got even luckier :). The shorts came back and pushed the stock downward at an extremely rapid pace (watch the video below to see how fast this thing goes from 132.9 to 132.5) before reversing and becoming a hammer candle. The software wound up triggering at the break of the hammer, and I had absolutely no doubt that all my targets were going to be hit up to around 133.25. And here, please note how my bias helped me. If you were fine playing either direction, you could easily say we have a red hour, triple inside candle to the downside. You would have been stopped out less than a minute later 😁.
However, here comes a perfect example of how trading options can be so hard. My targets were hit. AAPL wound up returning to 133.25 in the 9:37 candle. But my return was terrible for a 30 cent move in the underlying this late in the week. Trade Unafraid selected the tightest option it could find. I took an image to further exemplify this of the option at around the time of the trade, and the delta was .63. This means that on a 30 cent move on the underlying, I should have expected to see a move of around 20 cents on the option. In addition, the move happened pretty quickly, and I was hoping for a little bit of an increase in implied volatility as well. But none of this happened, and the max move the bid went away from my ask was around 14 cents. Not too great 😓

There is one other thing that is good to highlight. After this trade, I stopped trading. As Rob frequently says, you can't get stuck seeing the charts based on how they want you to look at it. You have to be able to see compound 2's, 3's whatever it may be. This is a much greater awareness of what is actually going on. This is especially true with the lower timeframes. So check this out. Once my trade closed and didn't break the highs for the day, I realized first 5 minutes of the AAPL chart are going to be a compound doji, mother bar. Don't believe me? Check what the 5 minute chart looks like.
Still don't believe me? Look at what happens when the first broadening formation occurs once the top of the mother bar is broken. I wish I had still been paying attention then 😂. 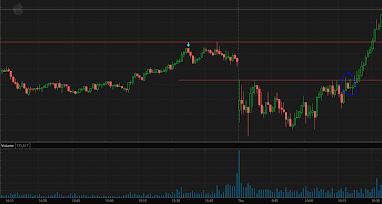 As always video below: