Today was the first day that this strategy was fully implemented, and I jumped right in and let it go.  I learned a couple of things, but it still made money and performed beautifully.  Video at https://youtu.be/p4KjFBQ2j24.

We have a new setup with an awkward name:  Break Candle Type 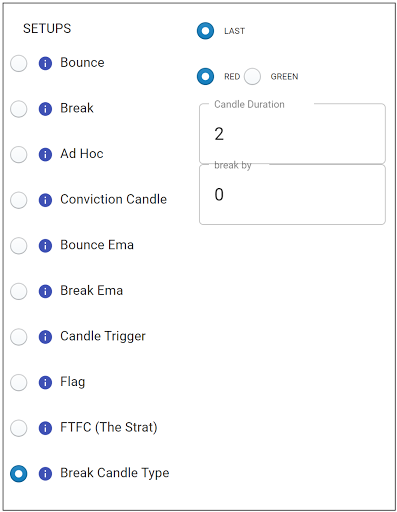 The configuration is very straightforward.  Right now, the only choice of candle type is "Last."  In the future, you'll be able to get more specific.  The important configurations are the color of the candle, Red or Green, and the candle duration.  Since I was looking to enter when price broke above the high of the most recent red two-minute candle, this is how I configured it.
Typically, I trade based on dollar amount, but this is a repetitive, quick scalp, and it was the first time it had ever been used in anger (just a cute way of saying that it was being traded live :-), so I decided to use a quantity of 2 on each entry.
I still wanted to have the benefit of Trade Unafraid's option selection, so I set it up like this.  I suspect that trading shares would be cleaner and easier, but my accounts are not funded with enough money at this point to trade meaningful numbers of shares, so options are the best bet.  So I let the software "work the order," attempting to get filled inside the spread, as well as filtering out spreads that are dangerously wide. 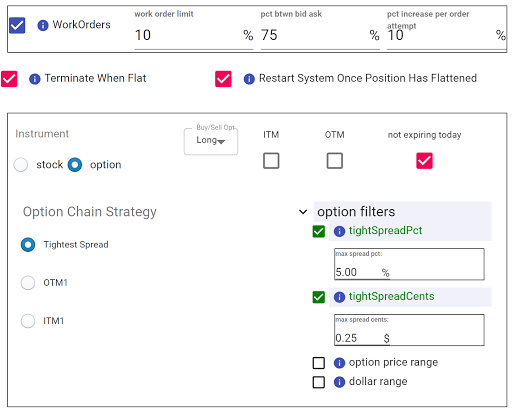 I also told it to use only the front expiration while also saying NOT to trade options expiring today.  This saved configuration can be used on Friday, and it will end up trading the next week's expiration rather than risking the ones that expire in a few hours.
The most important (and atypical) configuration on this screenshot is that the checkbox with the label "Restart System Once Position Has Flattened" is checked.  This will keep this Trade Plan running continuously, always looking for the next setup. 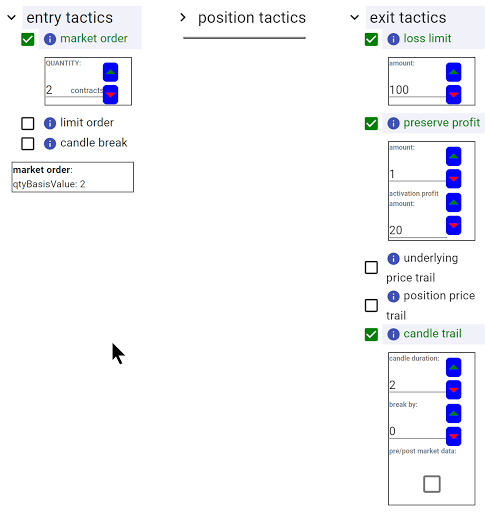 My entry tactic is a simple market order of 2 contracts.
When I started out, my loss limit was $150, which I learned was too large.  Today could have been even better if I had started out with $100 instead of $150.
I also used preserve profit to keep a winning trade from becoming a loser.  This means if I take a profit on my first contract, then Trade Unafraid will prevent that winner from becoming a loser.  I have it configured so that a $20 realized profit activates the exit tactic and will attempt to ensure at least a $1 profit on the overall trade.
I also have a two-minute candle trail, meaning that if the price of the underlying drops below the prior two-minute candle trail, then the option position will be closed. 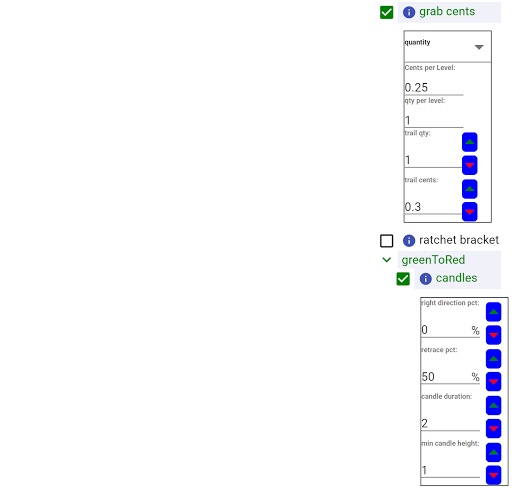 Rather than using my usual Ratchet Bracket for setting my target orders to take profits, I opted to use the simpler Grab Cents exit tactic.  I was looking for a 25 cent profit on one contract, and then letting the second contract trail at 30 cents.
The beauty of Trade Unafraid is that all of these "conflicting" exits are coordinated and work together so that any one of these conditions is triggered, the order will be entered and any conflicting orders will be canceled.  So, candle trail, loss limit, grab cents, and even manual button clicks are all managed in real-time, so that you never have to juggle with complex cancellations to do what you want.  You also don't have to worry about limit orders (unless you choose to enter a specific price), because the software handles that for you as well.  And, remember, we are working these orders, attempting to improve the price that you get filled at, even when you have effectively entered a market order.  That market order gets entered as a limit inside the spread and automatically adjusted to make sure price doesn't get away from you if you don't get a fill inside the spread. 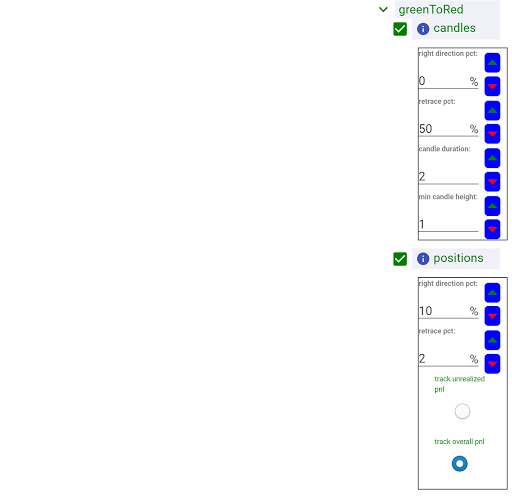 We have two other exit tactics to protect you from trades that start out in your favor but then reverse on you.  Not to be confused with the setup and title of this blog post, these exit tactics are both in the category of green-to-red.
The first of these watches candles to make sure that you don't suffer a strong reversal of price that moves against you.  In my case, I have it set up so that if price retraces 50% of the prior 2-minute candle, if its range from high to low is at least $1, then the trade will be exited, preventing you from taking a full stop loss as things seem to be reversing on you.
The other exit tactic says that if my overall P&L (realized and unrealized) for this trade hits 10%, then the trade will exit if that P&L drops to 2% or less.  This is another way of preventing winners from becoming losers.
There is a checkbox next to each and every tactic, so you can include or exclude each tactic to build precisely the Trade Plan that you like.  Each number is a field that you can fill in with numbers that make sense to you, so that you can personalize your Trade Plans for your needs.  And you can name, save, and load Trade Plans, tweak them, run them, delete them, etc.  This tool is made to trade your way. 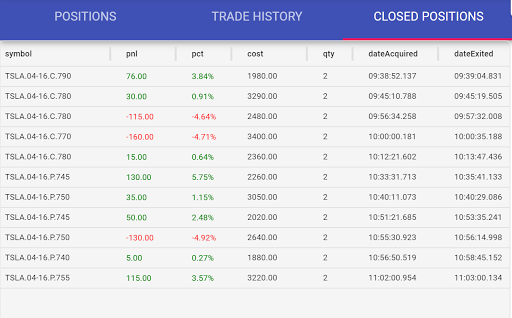 I ran this strategy 11 times today.  I had eight winners and three losers.  I netted a modest $51 profit, but I believe it would have been closer to $120 if I had started out with a loss limit of $100.
I also took a while to switch from TSLA long to TSLA short (note the change from calls to puts in the symbols), and that might have made an even bigger difference.  But that's just hindsight.

Since my first profit target is $25 on the first contract, you can see a few things.  First of all, I had a couple of nice runs on the second contract.  You can also see the effect of the profit protection in cases where the total gain is smaller than $25, meaning that I took that first profit and then got out before the trade turned red.  And as I write this, I'm wondering if $100 may even be too much of a loss limit.  This trade either works, or you're wrong.  Maybe I need to try a tighter stop to get out with a very minor loss when it doesn't work.
What's not evident in this blog post but will be in the video is that these trades run by themselves, and they restart automatically.  So I literally could have set these to run and shut down my computer.  Trade Unafraid actually runs on a server in the cloud, so I don't even have to be logged in once I've set up my Trade Plans.  They run precisely according to my configuration with no further interaction required.
However, I think I may have "taken the stick" once or twice today to override the automated trading system.  I don't recall.  The one thing I definitely did was, half-way through, I switched from going long on the break of red candle highs to go the other way, going short on the break of green candle lows.  That was definitely the right move today in TSLA, and that is not something that would have happened automatically.  Yet.  We'll get there.  ;-)

The bottom line is that I am thrilled to have this capability implemented and automated.  I suspect I'll be doing this every day for the foreseeable future.
Learn more here