Here are those results reduced to their fundamental stats: time in trade (seconds) and P/L (dollars): 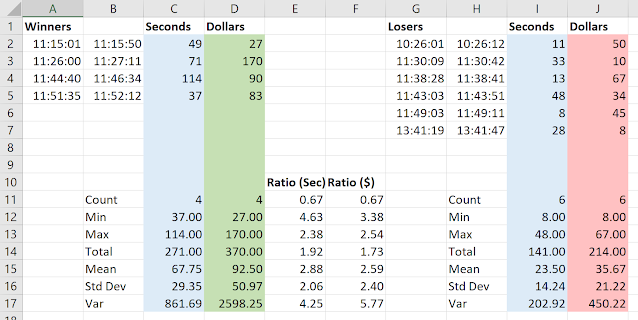 Winners on the left, Losers on the right.  For each trade, going across, there are the entry and exit times, the total time in the trade (in blue), and the p&l (green for winners, red for losers, with positive numbers in both columns to compare magnitudes).

I only had 40% winners out of 10 trades.  But the durations and the dollars are all stacked in favor of my winners.  Look at the Ratio columns for both seconds and dollars.  Those columns are simply the winner stat divided by the loser stat.  Very important to note that everything but count is roughly twice as large for the winners as the losers.  So I spend more time in winning trades, and I make more money in winning trades.  Approximately 2.5x as much.  This is the key.

How important is that?  Let's take a look at the situation numerically.  This spreadsheet is a generic analysis of winning percentage versus the ratio of winners to losers in dollars. 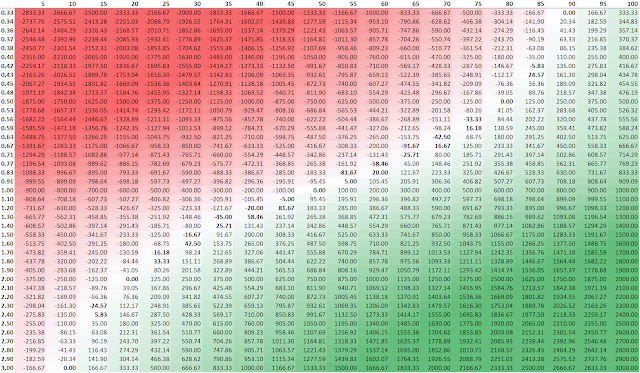 Across the top of this spreadsheet, we have the percent of winning trades from 5% to 100%.  Down the left, we have the ratio of the size of average winner to average loser.  So 1.00 means that winners and losers are the same size.  2.00 means that the average winner is twice the size of the average loser.  Numbers less than 1.00 are where the average loser is larger than the average winner.  I used an arbitrary multiplier of 1000 to arrive at more relatable numbers, but what's really important is the relative values within the table.
Of course, from a purely mathematical perspective, the table is symmetrical and asymptotic for the really unrealistic numbers.  But in the middle, where most of us live, you can see that there is a distinct diagonal line that separates success from failure.  The more often you can be correct, the easier it is, of course, to be profitable.  In the top-right, you can see that being right a ridiculous amount of the time can compensate for big losses.  But even then, note that you're not in deep green; it's a pale green, because big losers make things very difficult, even with the unlikely 90+% win rate.
What's interesting to note is how forgiving trading results can be with a decent ratio of winning size to losing size.  You might notice that you don't actually have to be right all that often to make money, as long as you make sure to win bigger than you lose.  If your winners are twice the size of your losers, you can be profitable with a 25% win rate.  If you can crank that up to winners 3x your losers, you're still profitable only being right 15% of the time!
There are two ways to get a high win:loss ratio.  The harder way is to have big winners.  The easier way is to have small losers.  Either way, you can get the same ratio.  Hitting home runs isn't so easy.  Keeping your losers small is definitely the more accessible feat.  Practice this discipline, and watch what happens.
The point is, it can be tough to be correct in the market.  You might think of your winning percentage as the independent variable, outside of your control.  What you have more control over is how much damage you let your losers do.  And as we've shown above, both theoretically and empirically, keeping losses to a minimum is your best route to profitability.
The results above were achieved with Trade Unafraid.  Left to my own devices, I cannot be counted on to take those kinds of quick, small losses.  To be perfectly honest, I suspect I am worse at it than most traders.  I would tend to wait for the trade to turn around and go my way, just letting my losses grow.  I didn't even trade the greatest setups today.  But I can live with the results.  Click here to learn more.