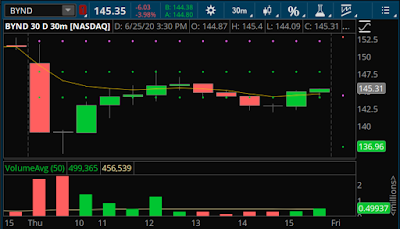 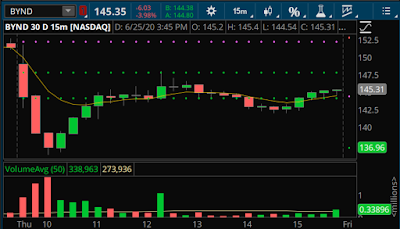 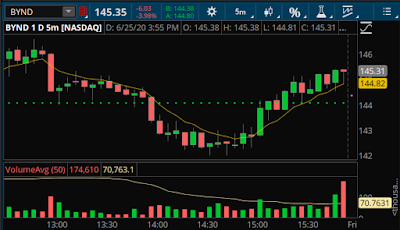 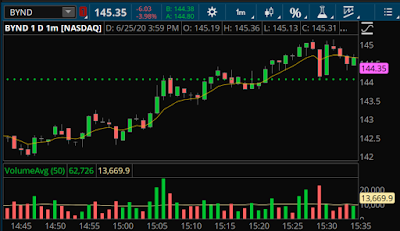 So I set up a Trade Plan on BYND for a break of the high of the inside candle.
I set it up to buy two calls, and I set a total risk for the trade of $60.  I set a first target of a quick 0.10 and then let the second call run with three different exit tactics in place.
The first was a one-minute candle trail, so if the price of BYND broke the low of any prior one-minute candle, it would exit.  The second was what we call profit preservation, where, having made money on the first call, I did not want to let a winning trade turn into a losing trade, so it would attempt to close the trade with at least a $1 profit.  The third was a 50 cent trailing stop of the price of the underlying.
I let the program select the best option to trade based on spread, delta, etc.
Then I clicked Submit, and I was done.  The rest was handled by the software.  I was completely hands off for the duration of the trade.
The first target was hit in about 16 seconds.  The trailer caught an updraft and rode price from 143.13 to 144.17 (gotta love TheStrat) but was then stopped out by the 50 cent trailing stop of the stock price.
These are the trades in our spectacular, user-friendly interface.

I checked the work orders checkbox to try and get price improvement inside the spread.  On the entry, the calls was trading at 6.40 x 6.60, but we managed to save a nickel.  The first target was a limit order, so there is no price improvement.  At the time of the second exit, the call was trading at 6.70 x 7.10, and we got a fill at 6.80.  Of the $35 profit, price improvement accounted for $15 of it.
I should add that we are trading with Tradier and pay zero commissions, even on option contracts.  There is a flat fee of $10 per month on the account.
These are the trades in Tradier's dashboard:

We have been working on this for many months, and it performed flawlessly on this first live trade.  This test account is a $2000 account, and it made 1.75% in three minutes today, effortlessly and stress-free on a pretty mundane setup.  Imagine what it could do on market open setups with larger-sized trades.  Imagine trading multiple setups at the same time.  All with no effort.  And with all your trading discipline operating at 100%.
We're pretty stoked.
Learn more here.