Posted by Trade Unafraid on June 29, 2020
To be honest, I forced a few trades today, because I'm eager to gather examples, wring out the system, etc.
One of the setups I forced today was a short on SPY at the Pivot, which almost coincided with the 5-minute 100EMA and the round number of 302.00.  So I set up this trade plan to buy 3 puts for a bounce at 302.
I set my max loss at $75.
I set an underlying price trail (meaning the price of SPY itself) at 20 cents.
I set a one-minute candle trail, meaning that the high of the previous one-minute candle would also serve as a stop.
I also set two of the three puts for targets of 10 cents and 20 cents.
And I set a preserve profit of $1, meaning that once I take some profit at that 10 cent first target, then the whole position would be closed at or near a $1 profit, if price started to go against me.
All of these exit tactics work dynamically and in concert with each other.  Unlike regular trading platforms, you can set multiple exit tactics that would not be allowed because they conflict with each other.  Trade Unafraid's platform is smart and will manage the position and the exits dynamically, adjusting as the market moves, and reconciling any potential conflicts. 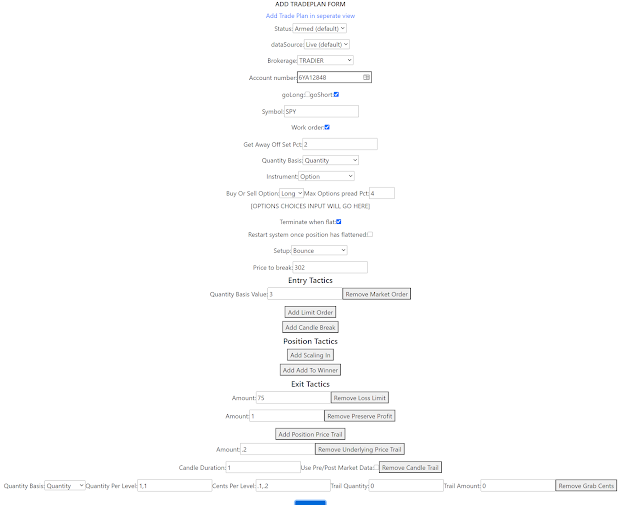 In this trade, price moved very little.  Eventually, the one-minute trailing candle high came down low enough that it took us out of the trade with a $15 loss, one-fifth of the $75 loss limit that I originally set.