A Choppy Loser of a Day, But With VERY Controlled Losses

Posted by Trade Unafraid on July 01, 2020
You can't win 'em all.  We all know that.  It just comes with the territory.  The question is, are your losses smaller than your gains, and do you keep your head when it goes against you?  This is where Trade Unafraid really shone (shined?) today.
Trade 1 - AAPL one-and-done - scratch
I took three trades.  The first was a one-and-done on AAPL.  Actually, I set up four one-and-done's, but only AAPL got through the filters.  We hit our first target, but then the preserve profit kicked in on the second contract, so we ended up with a scratch. 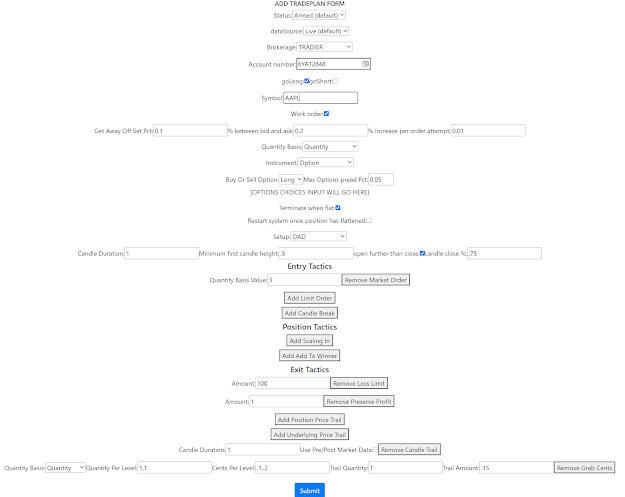 Looking at the AAPL chart, I clearly missed out on a nice trade by setting things up to be overly risk averse.  If I would have tolerated a little bit more heat, that trade could have hit all my profit targets and trailed higher, considering that price ran up $1.56 from my entry in the next four bars. 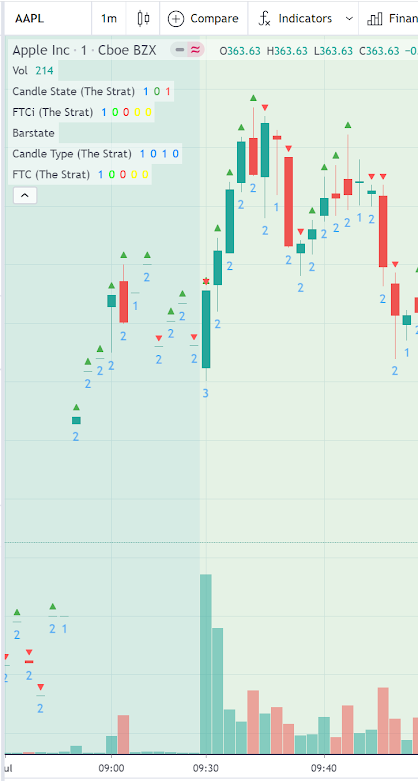 On the other hand risk parameters are a personal preference, and I didn't lose any money on this trade.  I'm still getting to know this tool.
These are the trades and their outcomes.  Out first target locked in ten cents on one contract, and then the preserve profit sold the remaining two each at a five cent loss.

One new and important thing to note in this table is the column on the far right, which captures the bid and ask at the time the order was triggered.  We have an feature called "work order" (work is a verb in this context), which means that we want to not just place a market order and put ourselves at the mercy of the market when there is a spread.  We will attempt to get filled inside the spread, along with some intelligent ways to adjust and know when it's time to give in and just execute the trade.  We avoid market orders if at all possible, because we've all had terrible fills, and they hurt.
If you look at the actual fills, versus the quotes at the time of the trigger, we got price improvement on both "market" orders when buying 3 and when selling 2.  The sale of the first call at 6.05 was a limit order based on our initial fill.
Trade 2 - SPY breakdown - $35 loss
In the category of forcing a trade, I decided that SPY looked like it was going to break down around 310, so I set up a trade plan to enter on a break of 310, but not just on a market order.  I was looking for price to then break the low of the next one-minute candle to confirm the down move.  With 310 being the bottom of a range, I didn't want to get stuck in a short just as it bounced. 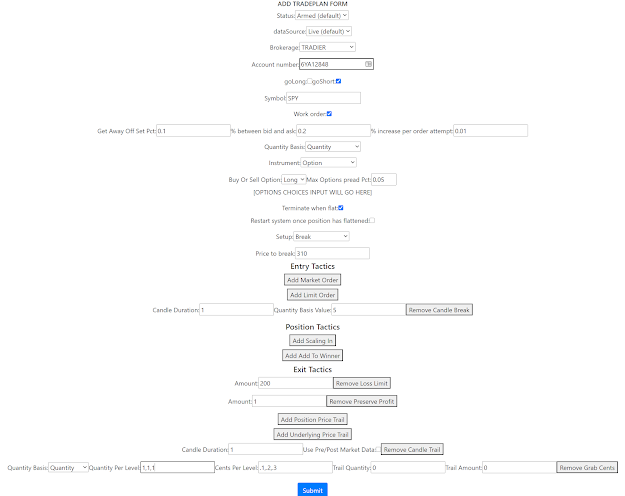 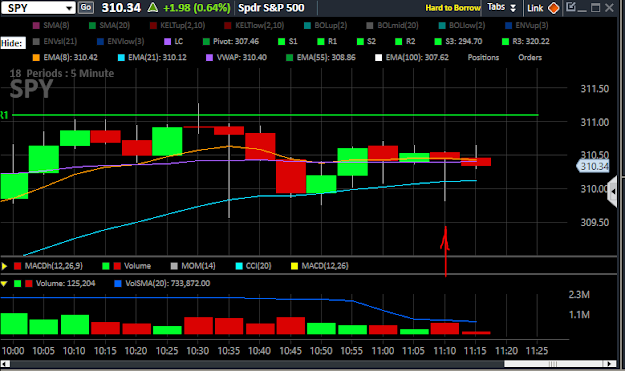 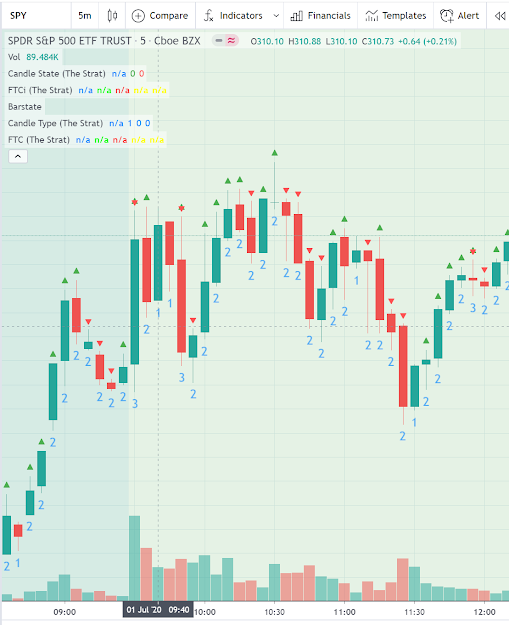 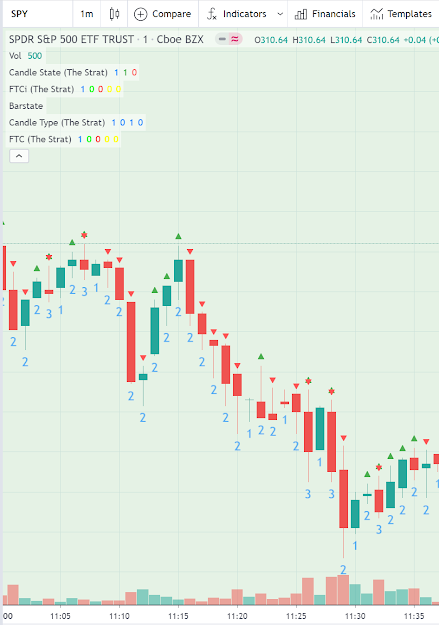 And even though I took those precautions, that's still pretty much what happened.  Price dropped on that 11:12am bar, broke the low of the prior candle, and I got filled just in time to sell the bottom and have SPY bounce right up against me.  So it was going to be that kind of a day.
The one-minute candle trail prevented the loss from being large, though.  I bought at 2.18 and sold at 2.11 on five contracts, for a total loss of $35.  And no commissions, so that's the total loss.

Trade 3 - SPY has support at 310 - $105 loss
So the SPY had proven that 310 was indeed support.  So, needing to force another trade for your entertainment, I decided my next move would be to buy the next time SPY broke above 310.00 and broke a one-minute candle high. 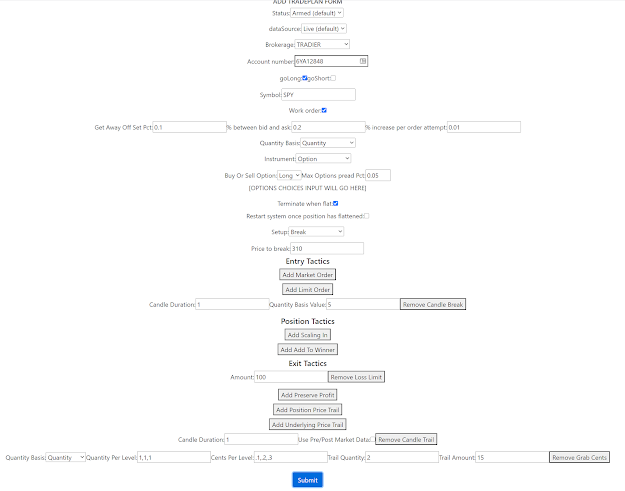 SPY, however, wanting to make a fool of me, was not having any of it.  It broke 310, barely nicked the top of the prior one-minute candle high to get me into calls, and then dropped to its low of the day, leaving me with my largest loss so far, $105.

Here are all of today's trades. 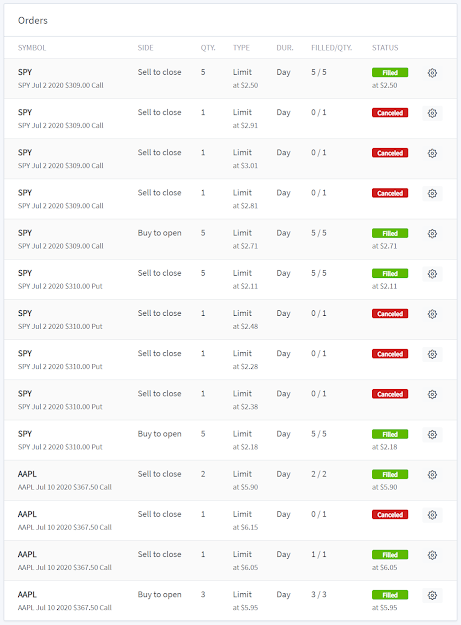 Conclusion
There's no getting around it.  Today was a losing day.  But they happen.  The losses were small and controlled.  Perhaps most importantly, I felt no sense of upset or failure.  I traded my plan.  I did nothing wrong.  I tried a few ideas, but they didn't go my way.  I didn't hang on to losers, hoping they would turn around.  Lose fast and small.  That's capital preservation in action.  And trading discipline executed by a robot without any emotions.  It's amazing how freeing that can be.
I'll also point out that I traded five contracts on these two trades, which makes my losses large when compared to my June wins.  But that's just because I'm growing more confident in this tool, so all my trades are going to get larger.
I think that's a very important aspect of this tool.  When you know that you're not going to do something silly like hold too long, you are safe to trade larger, which will allow your winning trades to be bigger.  Quick losses and quick wins, which this software is able to do in a way that you could never ever do by hand, allows you to trade more contracts, increasing your gains when your setups are good.  And with no commissions, there is no added cost to these larger orders.
It's going to be an interesting month.
Click here to learn more.