Not Losing Money Is Just As Important As Making Money

Posted by Trade Unafraid on July 09, 2020
Maybe more so.
And what I'm finding with this software is that it is really, really good at not losing money.  And it excels at keeping losses small.  And it never, ever violates its trading rules.  It is the most disciplined trader I know.  ;-)
We were set up for three one-and-done's this morning on CSCO, MSFT, and DOCU.  All three were filtered out.  DOCU and MSFT closed below their open on the one-minute candle.  CSCO's first candle had a range of less than .35.  These are my filters.  You can choose your own.  So, no one-and-done's today.  And if you look at the charts, that was a good outcome.

We tested out our new KYL capability today for the first time, and it worked perfectly.  We were set up for the 8EMA and the 21EMA on the one-minute chart.  BABA hit the 8EMA and kept falling.  Since we are able to use Mark's one-minute candle break for confirmation, we never entered as price kept falling.  It came down and hit the 21EMA, and the software is smart enough to only enter for one trade rather than entering for both the 8EMA and the 21EMA at the same one-minute candle break.
That's smart software.  It would be easy to blindly double up, since both setups triggered at the same time.  But we're not messing around here.  :-)
As you can see, it was not much of a move, as R1 and the 8EMA proved to be resistance. Still, we managed to hit our 10- and 20-cent targets and then break even on our runner.  $30 banked. 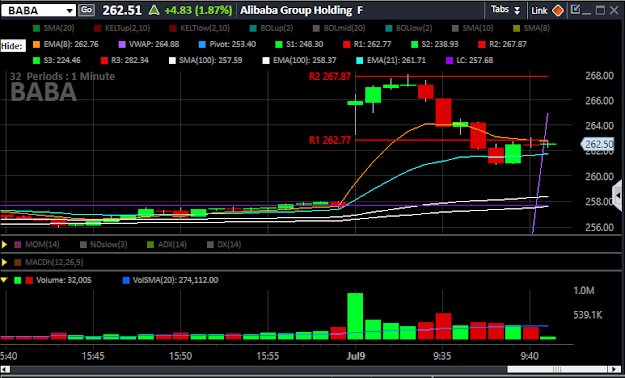 The next trade was another near failure.  I forgot to take a screenshot, but GOOGL, if I recall correctly, was bouncing off its five-minute 8EMA.  In this case, I used a percentage exit, rather than a quantity.  Here's why.
Filling out all these specs for a trade can be tedious and time-consuming, sort of like a fun and exciting tax form.  All these knobs and dials come at a price, and that is setting them to reasonable values.  So we have created templates where you can pre-define a trade and then load it up and go with your saved configuration (or make any tweaks you like first).  So, in this case, I had a pre-defined EMA template that exits 75% of the position at the first target and then trails the rest.  However, since I only traded two contracts, and 75% of 2 is 1.5, we exited both contracts at the first target, 11 seconds later.  Which is fine, because GOOGL went against the long trade almost immediately.  $20 banked.

As always, these are live trades with real money.  Here are the filled orders in the Tradier dashboard. 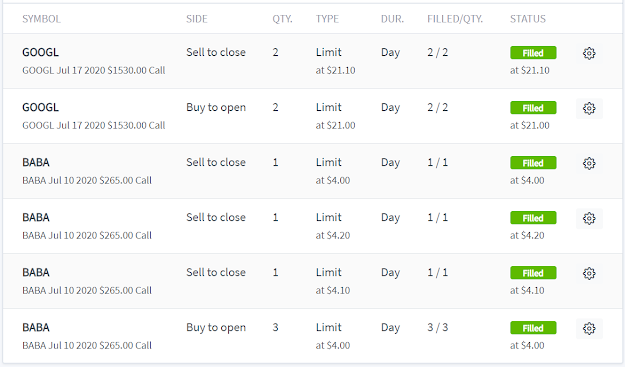