Automated vs Manual Trade on BYND

I happen to have traded the same one-and-done in BYND this morning both manually and using Trade Unafraid. 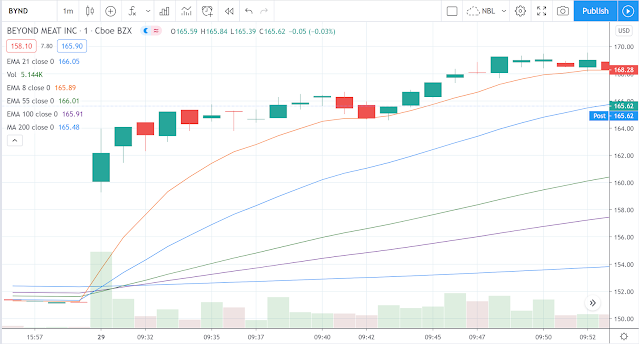 BYND seemed to be moving up, but the options were very tough.  In my trade journal, I wrote "Not a smooth trade.  Bad fill.  Was down a lot!"

Honestly, I know I should have sold the trade early, because it was pretty toxic.  I was red for a long time, around -$500 at the worst point.  I was picturing this getting pretty ugly and regretting that I had not taken the smaller loss when it was available.

In contrast, Trade Unafraid selected the Oct2 170 calls, took a quick profit on one contract in half a second, and exited the whole position two-and-a-half seconds later, when things started to go south.  Net loss of $2.

Now, obviously, an $88 gain is better than a $2 loss.  But what was the cost?
I violated my trading rules, had a psychologically rough 6+ minutes, and set myself up for what comes next.
A $2 loss makes you feel like a genius.  You were smart enough not to get sucked into a problem trade.  You are mentally ready for the next opportunity.
Toughing out a losing trade, holding it until it becomes a winner?  Well, that may not be the blessing that you think it is.
It is worth pointing out that only Trade Unafraid could take a profit half a second after entry and close out the whole trade in three seconds to protect the position from loss. 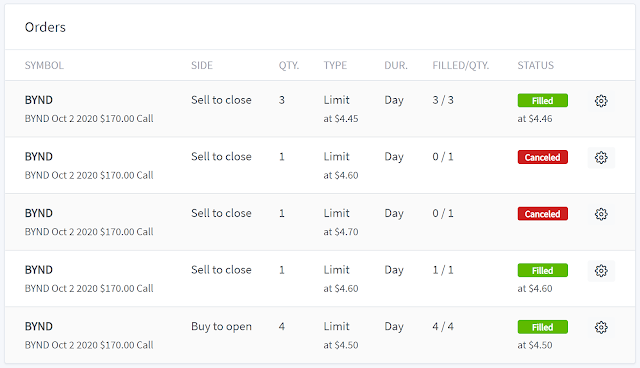 Here are the psychological repercussions of that manual trade...
At 10:15:01, I manually entered a BYND Mark V with the Oct2 170 calls at $5.86.  Looking at the chart now, it is clear that the break of the 10:10 candle high was a nasty head fake.  That was not so clear when trading the hard right edge. 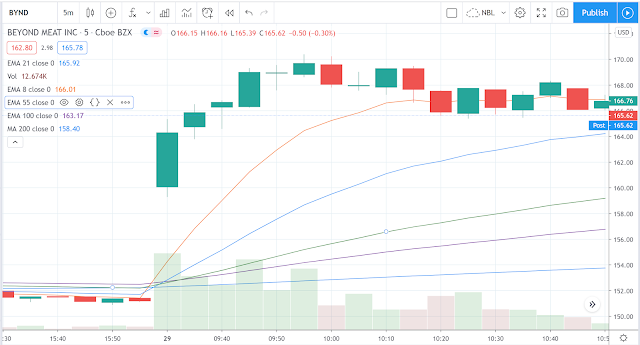 For 26 minutes, I watched the price chop around the 8EMA, hoping that I would see the same kind of positive move that I had seen at the open.  Sadly, I ended up losing a painful $2.07 per share or $621 on this trade.  Way too big of a loss.
It is also worth pointing out that Trade Unafraid would never have let that loss be anywhere near that large.  Only human beings trading on hopium and dangerous memories of trades that turned around for them have that programming flaw.

FWIW, in my manual trading, I fought my way back and ended the day up $119, in spite of this tough loss in BYND.
But the lesson is clear.  Quick reactions only available from automated software and small losses following strict trading rules are easier on the trading account and on the psyche.
Learn more here