Small Losses are Winners When Trading The Strat (or anything else!)

In early April, my trading account was around $350. Over the last few weeks, I have been practicing The Strat, and I found my way to Jim Bradley. I had a solid start last week, and I have decided to share my trading here.

Today's trade was a long in QQQ; it was a loser, but a small loss of only seven cents per contract. I will provide my analysis and provide some critique of myself as well.

First off, QQQ has been one of Rob's strongest names this month, as it comes off a "hammer counters shooter". The full time frame continuity should stand out to anyone familiar with The Strat. Here it is:

The month is 2u on a hammer counters shooter, the week is reconfirming the new highs, and the day is an inside candle that has broken to the upside. 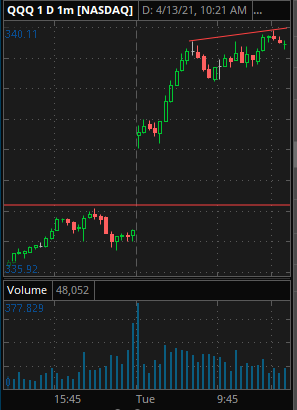 I saw this as a potential buy signal for the next rally on the 1-min chart. The QQQ's hit the top of the broadening formation before beginning to trickle down. On the small shooter candle, I thought that  perhaps the sellers had dried up and that the break of this candle could lead to the next leg up.
Additionally, I liked this setup because my reasoning for going long naturally resulted in a tight stop if the next candle had to go 2d. I believed that this was a good long setup, and it also happened to be that my stop on the QQQ's would only be around 20 cents on the candle trail.
Result and critique:

My entry occurred two candles later, where I have the letter "E" written. It occurred two candles later because I usually like to see a small break of the previous candle to confirm that the trade is actually moving. The trade reversed on me pretty quickly, and because I had created a setup with a naturally tight stop loss, combined with Trade Unafraid's automated exits which are blazing fast, I was able to get out with a very small loss.
A small critique for myself, and hopefully a lesson for anyone reading this...  I should have cancelled the trade on the 3-candle in the image above. It does not bother me that the move I wanted did not occur immediately. I had a naturally tight stop and, sometimes, trades take time to move. The issue is that I should have realized that the buyers were no longer solely in control. Yes, a 3-2 can be an actionable signal. But an exercise that Jim Bradley advised (check the video in the footnote below) is that you should trade only your perfect setups; you should trade setups that you close your eyes and imagine how they go, and they are playing right before your eyes.
To me, a 3 is never the perfect setup. Yes, 3-2's often turn into beautiful trades, but if there is a 3, I know that the shorts might still be there. Yes they can be stopped out and lead to a huge push in price discovery, but I don't find it to be the ideal setup.
Here are the results:

In addition, a video showing Trade Unafraid executing this trade in action. As mentioned before, these micro losses only occur for me because I have software that trades with algorithmic precision and speed and with perfect discipline.

The material and results shared in these posts are made possible by using Trade Unafraid. Trade Unafraid evaluates personalized criteria and selects the most favorable option, allowing traders to come out on top. With a “hands-off” approach, Trade Unafraid intelligently navigates the bid-ask spread and gives users the power to place “conflicting orders.” By fully automating trade entries and exits while still allowing you to manually override anything, Trade Unafraid compels user discipline and adherence to strategies.

Shoutout to @RobInTheBlack. I will never see another chart again without seeing #TheStrat. See More.

And, shoutout to @_JamesBradley__ whose approach to trading has made a tremendous impact on how I trade. See More.