The Power of Losing Small and Fast

I didn't have a great trading day today.  But it was actually quite remarkable. 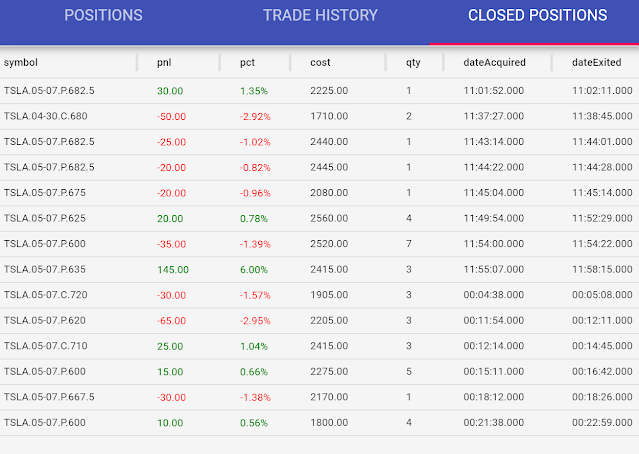 What makes this mundane, slightly down trading day remarkable?

Net loss $30.
If you can trade $32k worth of TSLA options, have a majority of losing trades, average a loss of $35, and have your worst loss be $65, you're doing something right.  You might even call that a trading edge.
Here is an example of failing fast and what it can do for your trading.  (I discovered a bug where the noon hour is displaying in the output above as if it is midnight with 00 instead of 12.  This will obviously be fixed.)  In the spreadsheet below, the winning trades are on the left, and the losing trades are on the right.  For each, I have entered the times of entry and exit and used Excel to calculate the duration of each trade in seconds. 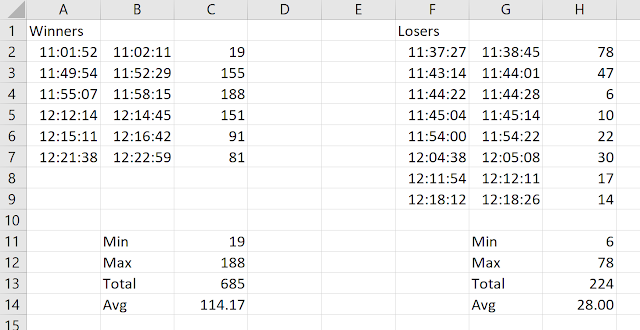 The statistics are rather illuminating.  Even though there are more losing trades than winning trades, the total time spent in losing trades is one-third of that spent in winning trades.  The average is less than one-quarter as long.  The minimum is one-third as long in the losing trades.  The maximum is less than one-half that of the winning trades.
I do recognize that there is a question of cause and effect here, and we must be careful about the conclusions we draw from statistics.  However, I can assure you, as I watched the trades play out, that there was no time where I thought "darn, I should have let that losing trade continue to go against me."  Exiting quickly and with small losses left me fresh and ready to try again.
Having an automated system that executes a pre-defined Trade Plan, ruthlessly lets losers go without hesitation, and takes some quick profit while still allowing runners to play out has proven to be incredibly valuable for my trading.
My primary goal when trading is to test this product thoroughly.  For that reason, I frequently force trades, trade at inopportune times, and do not patiently wait for the best setups.  Today's trades are no exception.  In spite of all these disadvantages, my Trade Unafraid trading results have been very good and getting better.  I never have a bad loss, as the trading above demonstrates.
The ability to fail fast, as demonstrated above, could be the edge you need to improve your trading results.  The ability to do it with automation could reduce losses, reduce stress and even allow you to trade more setups simultaneously.
Learn more here