Posted by Ethan on April 16, 2021
In early April, my trading account was around $350. Over the last few weeks, I have been practicing The Strat, and I found my way to Jim Bradley. I had a solid start last week, and I have decided to share my trading here.
Today's trade was a long in TSLA; it was a quick trade, lasting just over a minute, and resulted in a 7% gain. This is the analysis that led me to this trade...
I'm going to preface this post by saying that if you went against the trend and went short today, you probably could have made more money than I did. The problem though was that every indicator on the open looked bullish. The Q's and the S&P were going to open at highs. I am aware that we are in exhaustion risk, but I didn't see any indicators that we would flip at the open. I therefore composed my watchlist for the open of stocks that I believed could push higher, with the one exception of NIO as a short, but it has been climbing all day.
Now, you hear all the time about needing to have agility when you trade. You gotta let go of your biases and flip at the snap of a finger. Realize that everything's a short today, etc, etc. Well, I gotta say once again, another plug for Jim Bradley, who has improved my trading tremendously :). Trying to flip on the swivel like that is a move only done by desperate traders. You have to imagine your perfect setup, and sit, waiting for just that one trade, and be done. And going short in a market hitting highs is really tough. If you look at the S&P500 chart in the morning for example, it would have been near impossible for an extremely disciplined trader (which I know that I am, because I use software that almost forces me to be 😁).

It looks like there was a lot of puking down, but if you look closely, you'll see that it was FILLED with tons of tiny pokes above candle highs, which to me is an exit. So yeah, you could have made money fighting the trend. But I've spent a lot of time sucking to know that I would not have.
So I sat and waited. I almost called it for the day at around 10:05 am, but then I noticed one of Rob's favorite signals on the 15 min chart for SPY (I usually only look at the 1min charts so early in the morning, but it was so choppy, so I decided to zoom out a little bit). 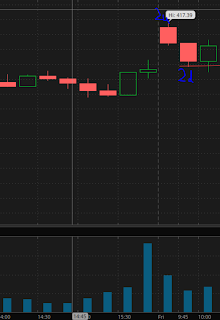 The S&P opened 2u-2d. But the third candle poked down, and turned and went above the open. And all "stratters" know what that means. We are going to take out magnitude. So I started watching again and waited for the setup that I knew I would make some money on. 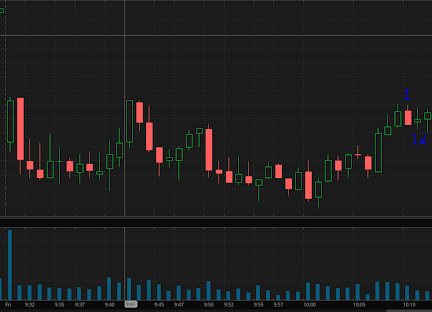 This is what I found. Now once again, I could have probably made more. But I waited for exactly what I wanted to see. We have the longs taking back over with the large green candle at 10:05, creating a pole candle. I waited for the flag to play out, creating my pivot machine gun. And boom! If you watch the 1 minute video below, the push above happens instantly. I get my IV pump (the heartbeat of a friday (all puns intended)), see the stock start wavering out, "close1" (a button in Trade Unafrid to cancel a resting order and sell a portion of your position instantly), and then flatten manually before my automated exits could take me out.
Results:
The video of the trade is below. For any scalpers reading this post, I'll just add another shameless plug for this software :).
At around 40 seconds, you can see me hit the manual close button. I'd bet my top dollar that right now on your software your close-type buttons consist of you closing 1 at market. Mine cancels my nearest limit order (to avoid conflicting orders), and then places a limit order and works the spread to boot! Just saying 😀.

The material and results shared in these posts are made possible by using Trade Unafraid. Trade Unafraid evaluates personalized criteria and selects the most favorable option, allowing traders to come out on top. With a “hands-off” approach, Trade Unafraid intelligently navigates the bid-ask spread and gives users the power to place “conflicting orders.” By fully automating trade entries and exits while still allowing you to manually override anything, Trade Unafraid compels user discipline and adherence to strategies. Please checkout TradeUnafraid.com

Shoutout to @RobInTheBlack. I will never see another chart again without seeing #TheStrat. See More.

And, shoutout to @_JamesBradley__ whose approach to trading has made a tremendous impact on how I trade. See More.