Attempted to short SPY at 303

Posted by Trade Unafraid on June 26, 2020
We had two more successful trades today.  Both made money.  And both uncovered bugs that needed to be found.
Trade Plan 1
At 10:20am, I set up a short trade on SPY, and I must confess that I can't recall exactly what the setup was, but I know it was inspired by David Frost's Inside the Numbers commentary.  But, rather than simply jumping in, I set it up to enter on the break of the first one-minute candle low, so at least I was not going to jump in short and just have it run up against me.
Emboldened by yesterday's success, I traded four options instead of yesterday's two.  I set a loss limit of $50, a five-minute candle trailing stop, and I intended to take quick profits on the first three contracts at 10 cents, 20 cents, and 50 cents.  In case things didn't work out, once the first profit was taken, it would have closed the entire position, attempting to leave me with a $1 profit.  All of these settings are optional and can be configured to your preferences. 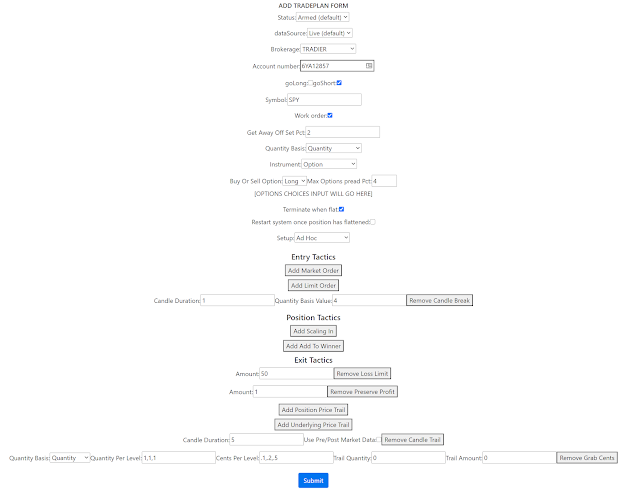 The entry went as expected, but then a bug came along and prevented all of my automated exits from working.  Fortunately, the trade went my way, and I was able to exit manually for a profit.  More importantly, we fixed the bug.
This trade plan made $83, but we can't really credit it to the software, since a bug prevented it from exiting the positions that it opened.  On the other hand, the one-minute candle break entry tactic made for a very favorable opening price.
Trade Plan 2
At about 1:38pm, I saw that SPY was heading up towards VWAP and a few other resistance levels, so I set up a new short trade for a bounce off of 303.00.  Unfortunately, price never made it that high, so I just let that trade plan work for a while.
At 2:54pm, I saw a new level of resistance at 300.75, so I adjusted the existing trade plan to bounce off of that price instead. 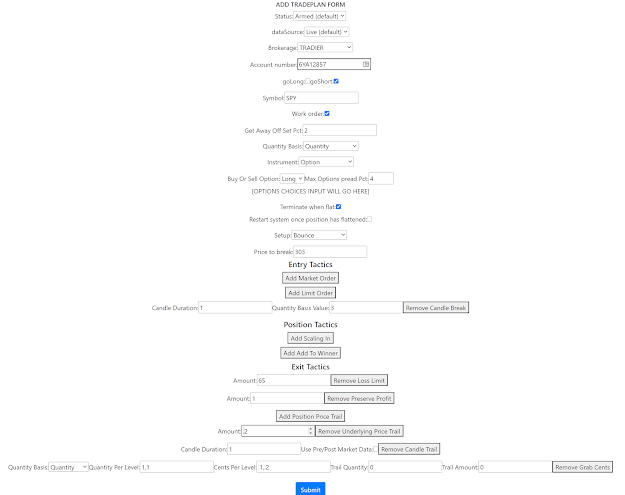 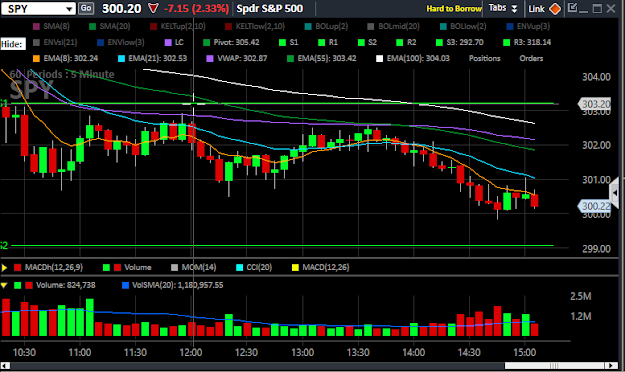 The entry was good, and the trade played out flawlessly (well, almost).  We sold one at 10 cents profit and the next one at 20 cents profit.  The third one trailed based on the exit tactics shown above.
It turned out that there was a bit of an issue with the code that was managing the trailing stop.  So we could have come out with a bit more profit than we did.  But we still made good money, and we fixed another bug.
To explain a little more clearly what happened, there was a bug in one of the exit tactics that prevented an earlier exit at a better price.  However, a second exit tactic, the trailing price of the underlying, stepped in and closed the remaining put.  It happened a little bit later than the one-minute trailing candle break would have, but we still made a nice profit on the trade.

Final Results
Here is the actual activity in the Tradier Dashboard.  The rejected orders were related to the bug on the first trade.  The entire second trade ran fully automated, despite the bug. 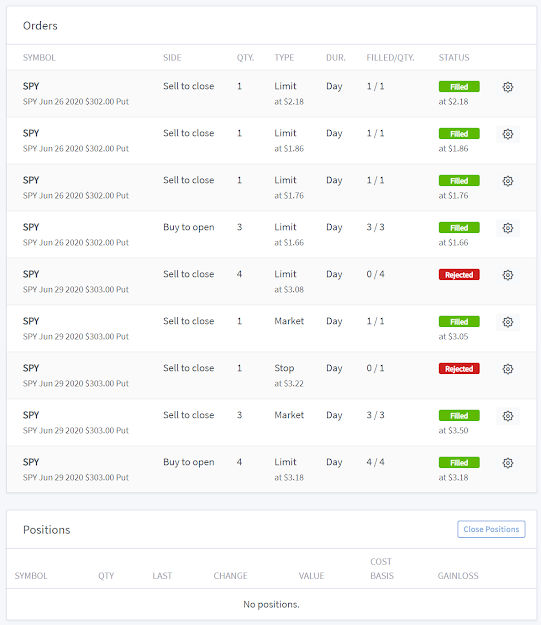 Since yesterday's first live trade, we have had three trades, and all three of them have made money.
I'm finding this type of trading to be exhilarating.  It's light and easy and fun.  And profitable.
I'm sure there will be losing trades.  But even then, there is no stress.  No stress to swiftly interact with trading software that doesn't make it easy to manipulate positions.  And no stress about whether or not to follow my trade plan.  Barring bugs, the trade plan is executed exactly as written.
Next week, we hope to run multiple simultaneous trade plans at the open.  Stay tuned for that!
Learn more about Trade Unafraid here.