Posted by Trade Unafraid on April 15, 2021
Yesterday was the first day that we had the 2-min scalping strategy, and it proved to be modestly profitable but extremely encouraging.
This morning, I started out doing exactly the same thing; however, it occurred to me as TSLA started to look weak after my first long scalp that I could very easily run the short version of this same strategy simultaneously with the long version.  And, so, I did.  I ran the long Trade Plan on one account and the short Trade Plan on another.

As you'll see in the video, the screen is unfortunately just a little harder to manage with the two Trade Plans active at the same time, so there's currently a bit of scrolling and collapsing required.  (We are working on a completely new UI that will address such issues.)  But the results were stellar.  The first four trades were like a ping-pong game, calls, then puts, then calls, then puts, and all four trades were winners!
That was $250 profit in 30 minutes, batting four for four, and I started thinking that I should probably call it a day after a run like that.
But I was probably a little giddy.  And greedy.  And I can also justify it as QA (Quality Assurance) that I need to do to wring out any issues in the software.  I have been trading all my buying power most days that I trade, and today was no different.  So I took off my disciplined trader hat and just let 'er ride.
Well, that didn't pan out so well.  😅
My amazing morning fell apart.  I gave back all my gains and substantially more.
But I think it's really important that we do not allow my undisciplined experimentation to overshadow the first 30 minutes of trading I had with these bi-directional scalpers running at the same time.
It was really powerful to watch the two Trade Plans working simultaneously to scalp in opposite directions.  I never found myself in a strangle, where I was long both a call and a put at the same time, but it conceivably could happen under the right circumstances.
After my nice start, I had two modest winners and seven losers, six of which were max losers.  The 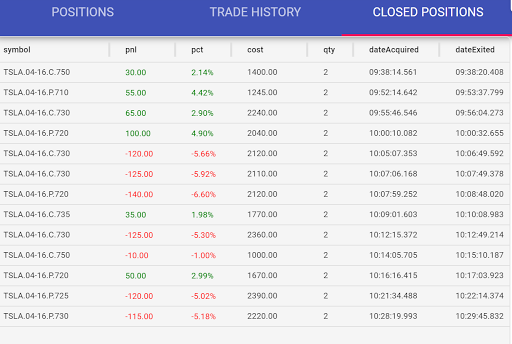 good news is that, out of this experience, we will be adding additional features to the product to help prevent this kind of outcome.
We are continuously innovating, always looking for new ways to improve the trading experience and trading results.
Trade Unafraid is designed to be completely flexible and configurable.  It can be used very differently by different traders or by the same trader under different circumstances.  Like any power tool, it is important to understand what you are doing when using it.  My string of losses was not good trading.  I did not read the market.  I just let the system continue running through a very choppy phase.
But I still have to say that trading with Trade Unafraid is a very pleasant experience.  I had seven losing trades in TSLA, and the worst of them was only $140.  My losses were all small and manageable.  I did not get emotional about them.  I did no long-term damage to my account or my psyche.  It's just a shame that such a nice start ended so badly.
Tomorrow, I may actually doff my disciplined trader cap, even though my job is QA.  We'll see.
Learn more here